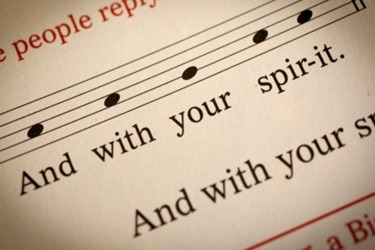 I am pleased to say that I received second place in the category of Best Photo Illustration at the 2012 Catholic Press Association Awards presented June 22, 2012 in Indianapolis.

The photo, which accompanied the story “Parishes adjust to new Mass translation,” appeared on the front page of the Dec. 2, 2011 edition  of The Pilot.

The context of the photo was that, beginning in Advent 2011, there were several changes implemented to the wording of the Catholic Mass in English. Of course, the main challenge of the photo was not technical but conceptual – How does one depict what is, essentially, an auditory change in a silent, still medium? I am grateful that the judges recognized my work.